I was already excited about being the 2019 Wine Media Cadet, and then they told me I was going to Bordeaux.

While I was excited, I was also in shock. I was expecting to get a call later explaining that they had made a mistake or that they had changed their mind.

It wasn’t until my flights and accommodation were booked that it really sunk in… this was really happening!

As part of the cadetship program, I attended the 20th International Annual Conference of the Great Wine Capitals (GWC) Global Network in Bordeaux, France at the beginning of November. 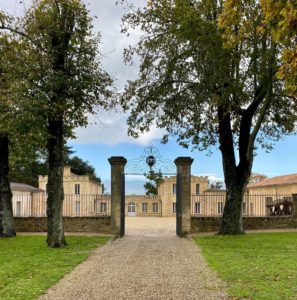 The conference was a five-day affair, consisting of technical winery tours, working groups and lectures by international wine experts with a focus on wine, tourism and innovation. It was also an opportunity for our Bordelaise hosts to showcase their beautiful city, surrounding wine regions and culture.

My attendance at the conference has not only given me a valuable insight into the importance of the network and why Adelaide should continue to be a member city, but it has also taught me a lot about Bordelaise culture, food and of course wine!

So where exactly is Bordeaux?

Beautiful Bordeaux is located in the South West of France, approximately 300km from Paris.

Bordeaux is located in the Aquitaine region of France, on the banks of the River Garonne, the gateway to the Atlantic Ocean and Western Europe. I learnt while I was visiting, that this is what allowed Bordeaux to become a successful port city.

The River Garonne merges with the River Dordogne into the Gironde Estuary, which then flows into the Atlantic Ocean. This network of rivers form the Left Bank and the Right Bank, where some of France’s most famous wine growing regions are located.

In case you are wondering about the weather, it rains a lot in Bordeaux. In fact, it rained every day I was there. However, there is an upside to all the rain… wine! Bordeaux’s moderate maritime climate means that the surrounding regions are well suited to grow red grape varieties such as Merlot, Cabernet Sauvignon, Cabernet Franc and Petit Verdot. The climate is also well suited to white grape varieties including Sauvignon Blanc and Semillon.

Tell me about the WINE… (and food)!

Well it was amazing! The French are known for being true entertainers and the GWC conference was no exception. On the first evening we were taken to a wine distribution warehouse known as Millesima.

After a tour of the facilities and a grand welcoming ceremony, a woman suddenly burst into song. As she sang in French, she led the entourage into the ‘Bibliotheque Imperiale’  – a wine museum where all wines were ‘en magnum.’ It was filled with wines from famous chateaux including Chateau Lafite Rothschild and Chateau Margaux.

We enjoyed an array of canapés including ceviche, foie gras, goats cheese tarts, caviar, smoked salmon, truffled crisps, prawns and a selection of French cheeses. A pianist played classical music while guests mingled and sipped on a glass of Bordeaux’s finest. It was all very French!

One of the most memorable experiences I had while in Bordeaux was the day of the technical tours.

The technical tours were an important information sharing exercise, where wineries could showcase their businesses, their wine and their wine tourism offerings to an international delegation. It was also an opportunity for delegates to discover and learn about the successes of each winery, so that these new ideas could be implemented in their own wine regions.

There were three options to choose from; Saint Emilion, Medoc or Sauternes, all of which are regions that produce incredible wines loved by many around the world. Saint Emilion is located on the Right Bank and is famous for their Merlot dominant blends. I was advised by a wise fellow to visit the picturesque Saint Emilion, so that is where I went.

I had said to this fellow that I did not like Merlot very much, and he said… “That is exactly why you need to go to Saint Emilion!”

As I found out, the difference in taste between an old world wine and a new world wine of the same variety is significant. He knew that I needed to learn about this difference, and he was right. The Merlot I drank in Saint Emilion was nothing like the Merlot I have had in Australia, it was so different and it was more to my liking.

Over the course of the day, we visited four well-known Chateaux; Chateau VilleMaurine, Chateau Soutard, Chateau Ferrand and Chateau Angelus. At each chateau, we were given a tour of the facilities and were able to discuss the different innovative tourism experiences on offer.

The highlight for me was our tour and lunch at Chateau Ferrand. The Chateau was everything I imagined a chateau to be. It was incredibly beautiful with grand gates at the entrance of the property and a white gravel driveway leading up to the doorway.

We enjoyed a quick tour of the winery, barrel room and VIP areas of the Chateau before being officially welcomed in the tasting room with a glass of vintage Champagne and canapés. We then enjoyed a four-course lunch with paired wines. The wines we enjoyed were:

These wines were some of the best I had on the trip and really changed my perception of the Merlot grape. I can only hope that these wines might one day be stocked at my local wine shop!

Another highlight of the trip was my last day in Bordeaux. I walked the streets with wine writing legend, Tony Love, who is an incredibly humble and kind human. We stumbled across some markets and a stall that was selling seafood. The seafood stallholder greeted us and asked where we were from. When we said that we were from Australia and therefore couldn’t buy anything to take home with us, he offered us a freshly shucked oyster each.

After having a few experiences with spawning oysters over the years (yuck!), I had well and truly given up on them. So, I let Tony have the first oyster. He threw his head back and tipped the oyster into his mouth. After tasting it, he exclaimed how delicious it was. The fishmonger insisted I try one, so I stepped out of my comfort zone and gave it a go. To my surprise, it was…. so fresh, salty, sweet and delightful! I think its safe to say, that after that delectable experience I am back on the oyster bandwagon.

When I was growing up my mum used to cook very traditional French dishes such as Beef Bourguignon and terrines made from chicken livers and pork. She always used to say that French food and wine was at the pinnacle of all food and wine.

After spending a week in Bordeaux and receiving wonderful hospitality from our French hosts, I can see why my mum believes this. When you have the freshest produce and a chef that knows what they are doing, French food is stunning. The wonderful wines produced in the region complement the beautiful food.

But I will say this… after a week of everything French, I was very much looking forward to a glass of South Australian Shiraz and some Adelaide Hills Double Cream Brie on a Jatz biscuit.

While some might suggest that South Australian wines may not have the same prestige as the wines of famous French chateaux, it is my opinion that they are just as delicious. I do think that we are so lucky in South Australia to have such fresh produce and stunning wines that represent our South Australian terroir. To my mind, what we have in South Australia is just as good as anything you will find in Bordeaux.

I saw some breathtaking sights, ate some of France’s finest cuisine and met some fascinating people from across the globe, but at the end of the day, home is where the heart is… and my heart is in South Australia.