Brian started his career as a winemaker with Thomas Hardy and Sons in 1969, and he went on to found a winemaking consultancy and develop 2021 WCA Legend of the Vine_Press Release 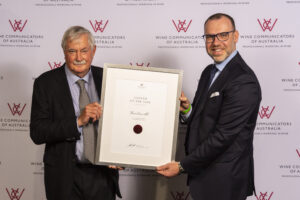 Brian has also been awarded the Order of Australia. He received this honor in recognition of his outstanding contribution and service to the Australian and South Australian wine industry.

Andrew Stark, WCA Executive Officer reflects on the announcement, “Brian Croser is a genuine legend. His contribution to the industry is unquestionable. He has been a brand champion, advocate, educator and mentor for our industry over a sustained period, and has played a significant part in advancing the careers of many of today’s household names. We are honored to award Brian our 2021 South Australia Legend of the Vine”