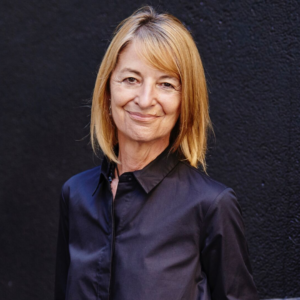 Judy Sarris has had a long career in the food and wine industry. In 2003, she was appointed editor of Gourmet Traveller WINE magazine – Australasia’s leading publication on the subject. In 2004, the magazine enjoyed a successful relaunch in Australia and into the New Zealand market. In 2016, 2017 and 2018, it was voted Best Wine Publication (consumer) at the Wine Communicator Awards and was awarded Wine Communicator of the Year in 2016

Prior to joining Gourmet Traveller WINE, Judy worked on a varied range of magazine titles, as well as publishing and editing a number of her own books, including Australasian Ingredients, which has been translated into numerous languages and has achieved record sales of more than a million copies worldwide. Another publication, Banc Book, which she wrote and edited, was winner of the silver IACP (Institute of Culinary Professionals) International Award presented in New York in 2000.

In addition to Gourmet Traveller WINE, her company also produces a digital version of the magazine, Winecraft.com, a website dedicated to wine travel and Cellar Press magazine, which recently won Brand of the Year at the 2019 REAL Awards, for Vintage Cellars.  Her team also runs numerous wine events including reader and corporate dinners as well as the prestigious Gourmet Traveller WINE Winemaker of the Year Awards in both Australia and NZ.